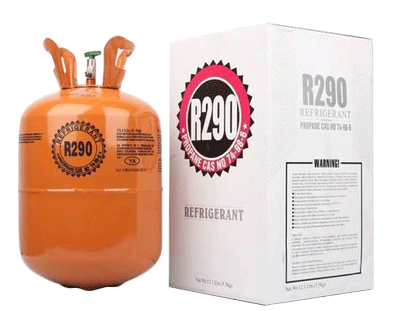 R290 refrigerant (ODP is 0, GWP <20), refrigerants represented by China, Germany, Sweden and other countries, the latent heat of vaporization is about 2 times that of R22, and it has good material compatibility with the original system and Lubricants are compatible and have a relatively broad market in China, but there are still some problems in application.

R32 refrigerant (ODP is 0, GWP is 675). In 2012, a Japanese air conditioning company took the lead in launching the R32 environmentally friendly refrigerant air conditioner. Its thermodynamic performance is similar to R410A, and the filling capacity is 70% of R410A. The system cooling capacity is higher than R410A, which helps slow down. The shortage of electricity and the reduction of carbon dioxide emissions have set off a wave of energy conservation, but the GWP value is too high and the popularity in the country needs to be improved.
Refrigerant R436C

R436C refrigerant (ODP is 0, GWP <3), which is the patent achievement of the National 863 Scientific Research Program. It is produced by Jiangsu Furui to R & D and has a density of only about 40% of R22. It has a larger refrigeration capacity per unit of refrigerant and shortens the equipment refrigeration. Time, the basic power saving rate can reach 10% -36%. When the refrigerant is replaced in the R22 refrigeration system, it can be directly charged without modification. At present, it is widely used in Jiangsu and Guangdong provinces, and is actively exploring markets nationwide and overseas.

Analysis How to comprehensively analyze the cost-effectiveness of the three?

In terms of the scale of replacement, the R290 currently has a wide market range.

But from the perspective of the refrigerant itself, according to the standard requirements, the allowable charge of R32 is ten times looser than that of R290, and its application range is wider, but R32 also has problems such as higher GWP values.

436R436C's GWP <3 is more outstanding than the two, and it has national patents, and its power saving rate can reach 10% -36%. It is an excellent emerging environmentally friendly refrigerant.

When customers choose, they need to compare with each other. Some products are widely used but have many problems. Some products have small markets but have great potential. Finding a refrigerant that truly suits the situation of your company is considered value for money. It has become a combination of environmental and economic benefits. The winner.

According to the "Montreal Protocol" adopted by the United Nations in September 1987, China began to reduce the use of refrigerant Freon (R22) year by year in 2013, and by 97.5% in 2030. By 2040, the country will ban the production of Freon. Choosing an environmentally friendly and energy-saving refrigerant to replace Freon is in keeping with the tide of the times and helping the sustainable development goals.